There is a lot of information on the cyber space on rape and the legal impediments of rape; some right some wrong. This article aims to separate the facts from fiction and also to provide some guide for rape survivors if they intend to pursue a criminal case against alleged rapists.

In a nutshell, rape is non-consensual sexual intercourse. When a man has sex with a woman without her consent (in Nigeria – apart from in the FCT Abuja, only women are capable of being raped). When a woman has non-consensual sex with a man it is termed sexual assault. Sexual assault is similar to rape, but is not rape. (Lawpadi 2018) (this has been expanded to all states where VAAP has been signed)

Myth One: Age of consent in Nigeria is 11; This information is false; the Child’s Rights Act of 2003 sets the age of consent at 18; however the challenge here is some states domesticated the law and reduced age of consent in their states while 11 states are yet to domesticate the Childs Rights Act. (Domestication of a law means when a law is passed by the Nigerian National Assembly and signed by the President, states also have to pass the law and the state governors also sign hence making that law applicable in those states). Advocacy should be focused on getting the remaining 11 states on board.

Myth two: Since 1960 there has been only 18 Rape Convictions in Nigeria; This information is also false. Though I am unable to get a current figure the number of convictions is no where around 18. Even though this figure is still low, the challenges of getting convictions have mostly been from under reporting by victims and family members who believe the court and legal system may not give them justice. In some cases families have received compensation from the alleged rapists and refused to pursue cases further, in other cases lack of diligent prosecution, also poor training of police officers who receive reports of rape cases have discouraged victims from pursuing cases further. It is in response to this that some states have established helplines for sexual and domestic assault and some NGOs have worked to help victims get justice.

Myth three: Rape Laws are Lax: While laws could be better in some areas eg; marital rape and redefining rape to mean sex without consent for both genders; the current laws are quite harsh on offenders. The VAAP law now has addressed some of these concerns.

These are the stipulated punishments for sexual crimes in Nigeria;

Please note that ignorance of the age of the girls or as regards consent will not ground a defence (Wale Joseph November 2015; My Job Mag)

Step By Step Guide to reporting Rape Cases in Nigeria:
In the sad event of a rape; Rape Survivors may find these steps helpful:

3. Make a report at the Police Station; A report of the incident is very important to get the case started, it is very important to remember and report every detail as this will help get the offender. If the victim is calm enough it may help to write out details before going to the station. If the police response is not satisfactory kindly report to 08057000001 Police Complaint Line. The IGP has recently pushed for establishment of gender desks in all Police Stations, a victim or family members should request for the gender desk or officer at a station.

4. Get Medical help and a medical report; Family or friends can rush the victim to the hospital while making a police report. It is important to go to the hospital so the victim can receive immediate medical attention to prevent infections and pregnancy and for medical evidence of a rape which is needed for a strong prosecution case. Also some hospitals have social workers who will offer immediate counselling for victims. A government hospital is preferable for prosecution purposes even though the Court of Appeal has ruled that reports from Private Hospitals are now admissible.

5. Speak with a Lawyer: It is very important to speak with a good lawyer to guide you through the process of getting justice; some NGOs offer this service. A good lawyer will ensure that there is diligent prosecution and guide against public statements that may compromise the case

7. Use of Social Media: In some rape and sexual assault case social media has been instrumental in getting justice especially when the police is lax in investigations, also funding is important in pursing rape cases, medical examination; in cases where the alleged rapist has fled to another town funds may be needed to facilitate an arrest unfortunately the police will say they are not adequately funded to carry out inter- state arrests ; Social media can help with such funds and also act as pressure to ensure diligent investigation and prosecution; however not all details should be put on social media as some details could alert the suspect, and compromise the case hence the need to have some guidance from a lawyer

1. Family: Family should offer support and not judgment; in cases of minors parents should not disregard reports, tale signs in their children. It is also important to consider the victims health in all decisions and stop the practice of receiving compensation to kill cases. Victims must receive immediate medical attention and family must ensure this is done

2. Police: The Police must be trained to understand rape as a serious issue and take the right and honest steps to investigate cases. Better funding for investigation of cases will remove the burden from the victim who may be discouraged by the expenses in pursuing a case. Gender desks at some police stations is commendable; regular training and refresher courses on new laws is required. Also gender desks should be set up in all police stations so victims can receive adequate assistance from the police to encourage follow up with prosecution.

3. State Prosecution: Work with the police to ensure diligent prosecution of rape cases. Open communication lines with victims and families. Ensuring that the burden of funding doesn’t lie with the victim and their families

4. NGOs: Help provide/ source funding for prosecution, work with police and prosecution to ensure victim is well represented, act as a pressure group , provide support and counselling for victims, advocate for domestication of progressive laws on sexual violence, child’s rights act, VAAP law and the sexual offences bill. Also advocate to state Governments to set up response hotlines to domestic and sexual abuse.

5. Social Media: BE RESPONSIBLE IN REPORTING RAPE CASES; Responsible reportage by bloggers and social media users is important to ensure prosecution and for the victims recovery. Using the victims pictures, sharing pictures or videos of the rape if available are not helpful; sharing videos and pictures of a rape of a minor can be regarded as distribution of child porn which is a crime. Sharing pictures of a minor without blurring the face who has been abused is also unethical. While we are all passionate about ending rape and punishing offenders, it is responsible to remember as hard as it may be that the alleged rapist under the law until proven guilty still has a presumption of innocence.

Most importantly; DO NOT SHAME THE VICTIM, RAPE IS A CRIME, THE VICTIM SHARES NO BLAME IN RAPE.

Ps: Akwa Ibom has signed the VAAP law so they are no longer on this map. 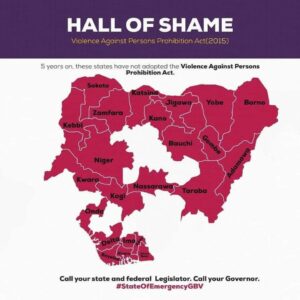 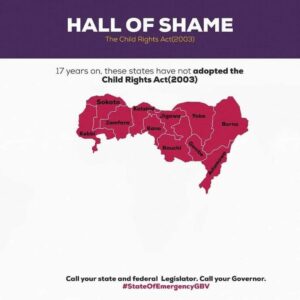 About Aishatu Ella-John
Aishatu Ella-John is a Graduate of Sociology and she is based in Abuja, Nigeria. She is a Community and Child Development worker with over 14 years of experience. Her interests are research, advocacy and grassroot policy implementation. Aishatu can be reached via aishatujohn64@gmail.com